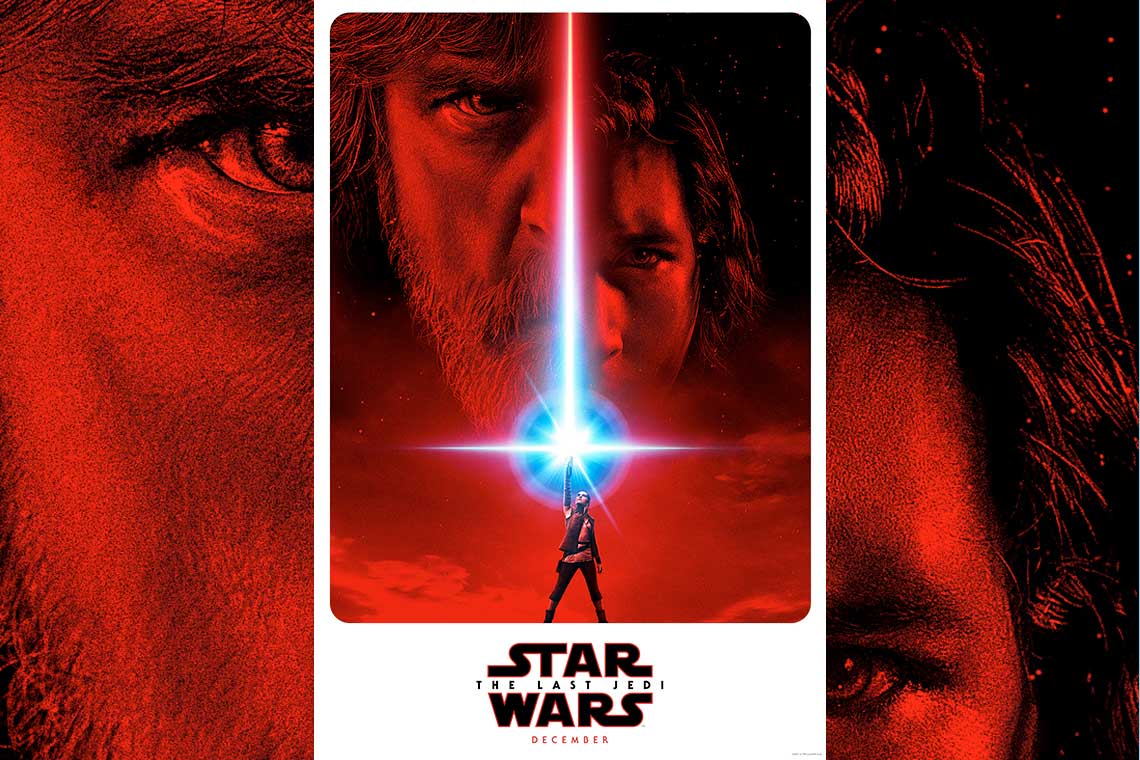 Then he asked them if they wanted to see a trailer. Of course the crowd erupted, and the screen went black. 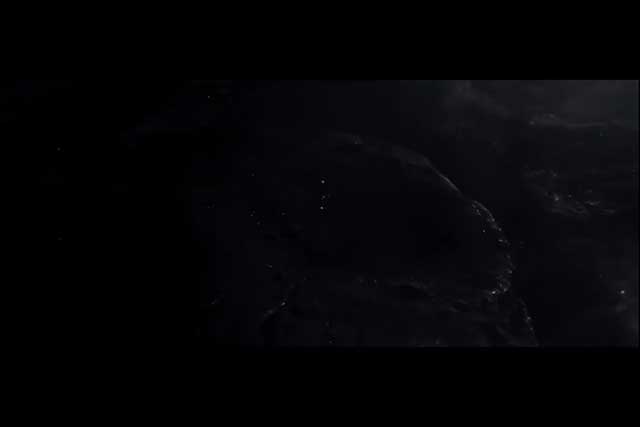 The screen fades up from a shot of stars in space to a dissolve to a bunch of darkly lit rocks.

The music hits a crescendo as Rey jumps into the frame, very similar to the shock of seeing Finn for the first time in The Force Awakens. 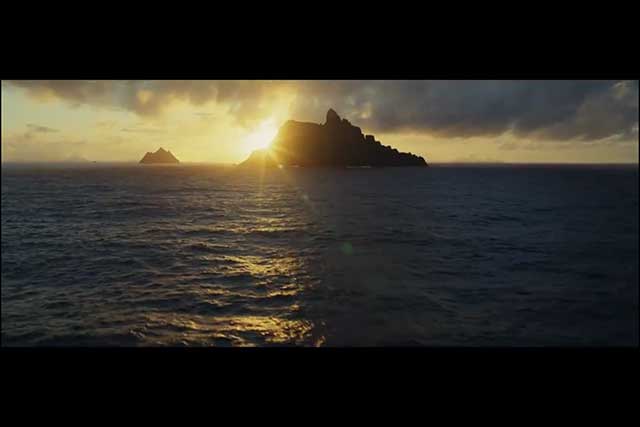 Luke’s voice narrates the entire trailer beginning with: “Breathe, just breathe” – as a shot of what I am calling “Jedi Island” comes into focus, and an image of Rey standing at an opening fades from black. 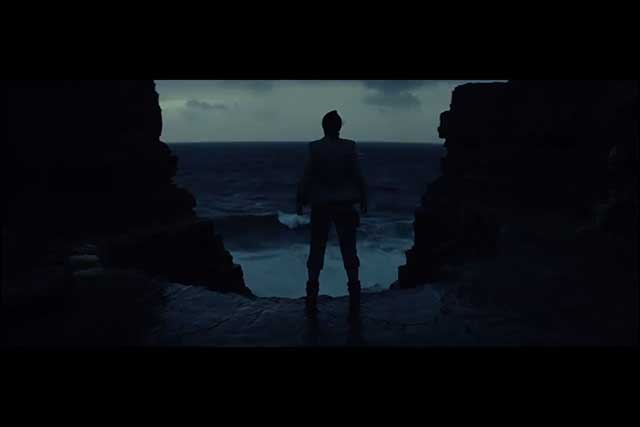 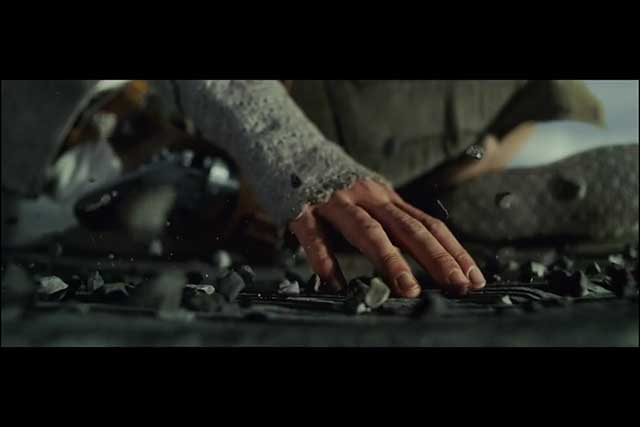 “Now, reach out.” as Rey begins to levitate small rocks (similar to how a Jedi assembles a lightsaber). 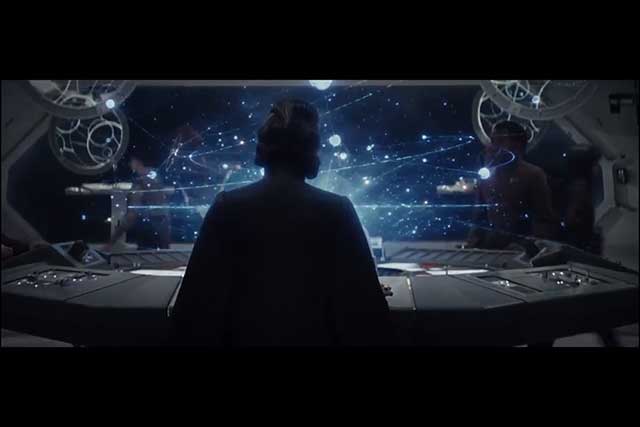 As an image of General Leia Organa at a galactic map comes up, Rey’s voice says “Light”. 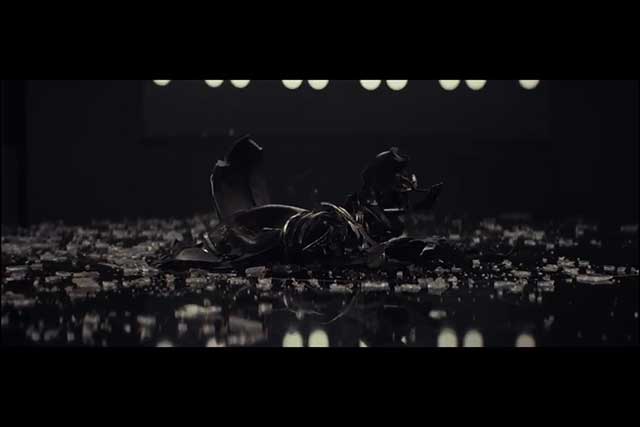 “Darkness”, she continues as a smouldering shot of Kylo Ren’s shattered mask is shown. 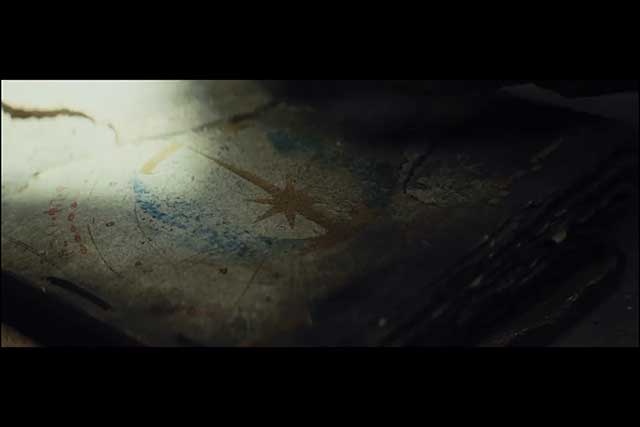 The music crescendos as a shot of books being illuminated by a ray of sunshine fades to a paper with the Jedi symbol on it, and what looks like Rey’s hand touching the paper before she says “The balance.” 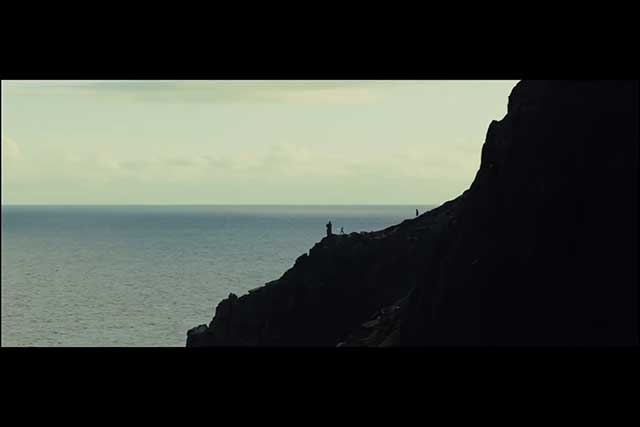 Luke returns to he narration saying “It’s so much bigger.”, as two figures are silhouetted on Jedi Island, with the one that appears to be Rey practicing with a green lightsaber. 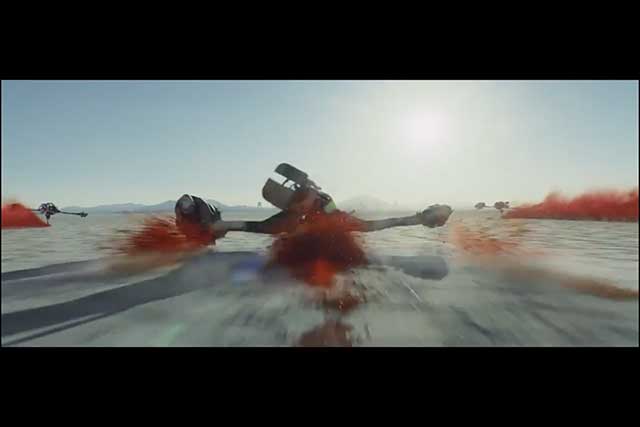 A strange speeder like looking ship is shown crashing and recovering on the planet of Crait (a former Rebel stronghold), which spouts up red plumes of iron rich sand over white salt deposits (according to director Rian Johnson). 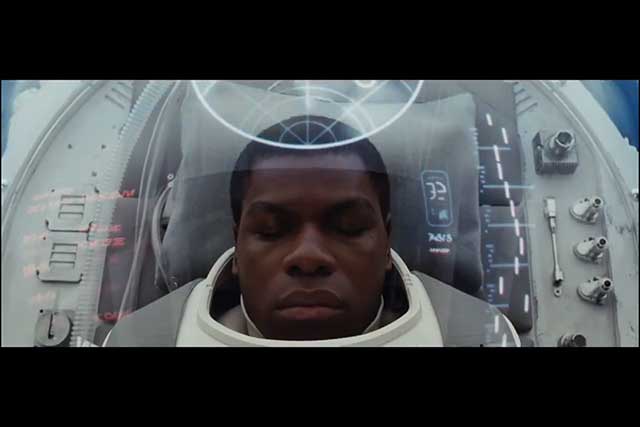 A shot of Finn in some sort of medical pod as he recovers from his wounds at the hands of Kylo Ren. 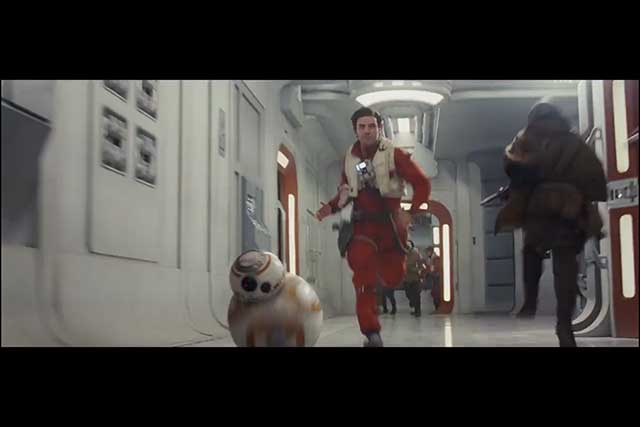 Poe Dameron and BB8 running through the corridors as they head towards Poe’s Xwing Black Leader, which explodes inside the hanger. 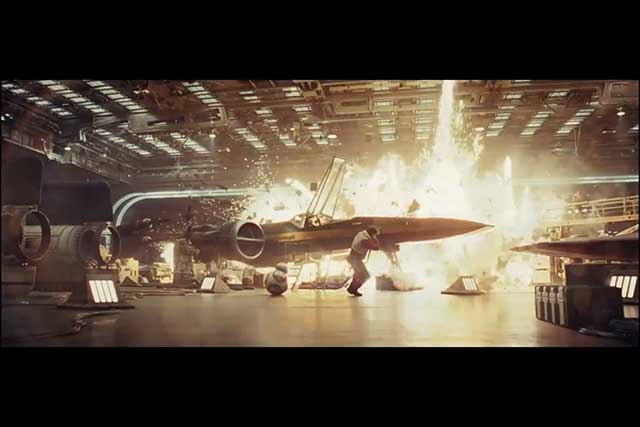 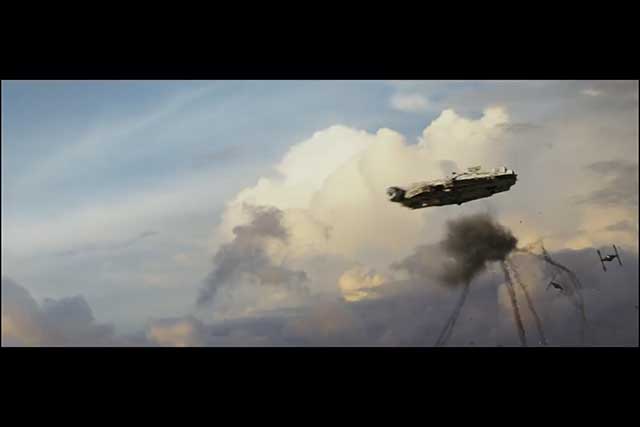 A Tie Fighter explodes as the Millennium Falcon comes into view being chased by more Tie Fighters. 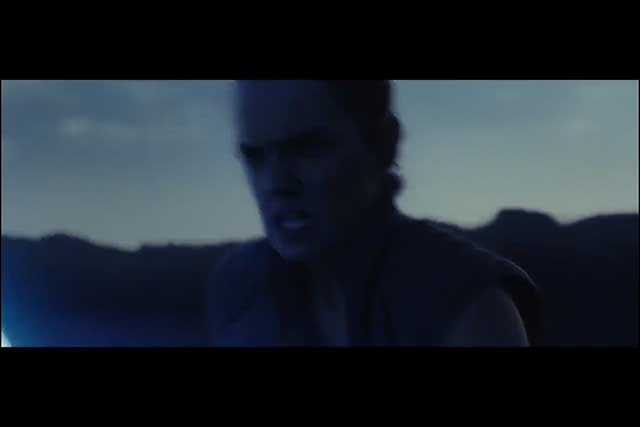 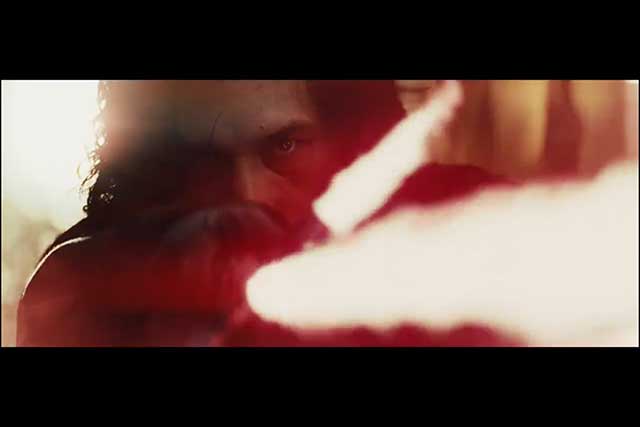 Kylo Ren, helmetless but with a badassed scar on his left eye, stretching out his awesome lightsabre.

“I only know one truth.” Luke’s voiceover continues. 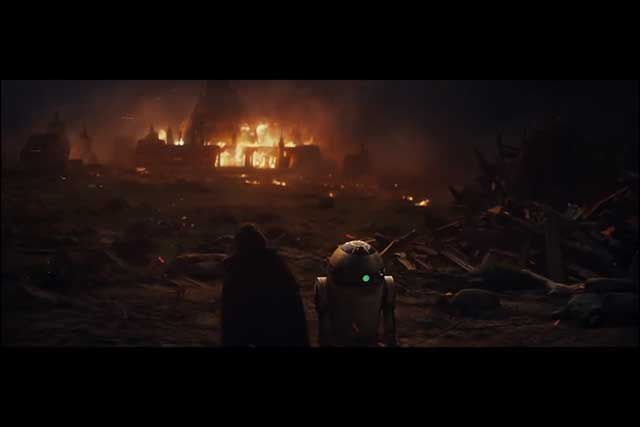 The Last Jedi – Luke and R2

Luke and R2D2 are now watching a burning building as Captain Phasma and a group of troopers stalk throught he burning wreckage. 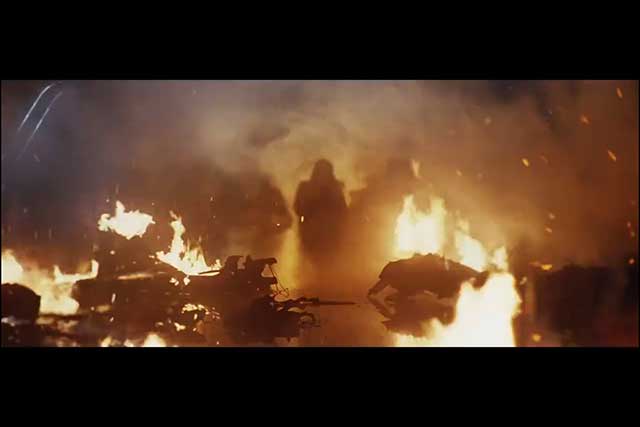 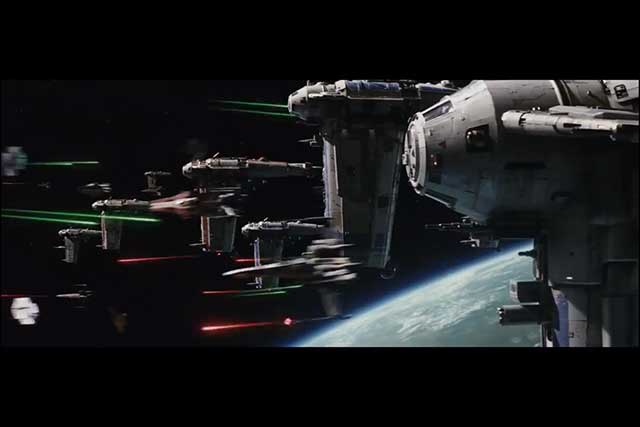 A ton of Rebellion capital ships are engaged in a massive dogfight with first order Tie fighters. 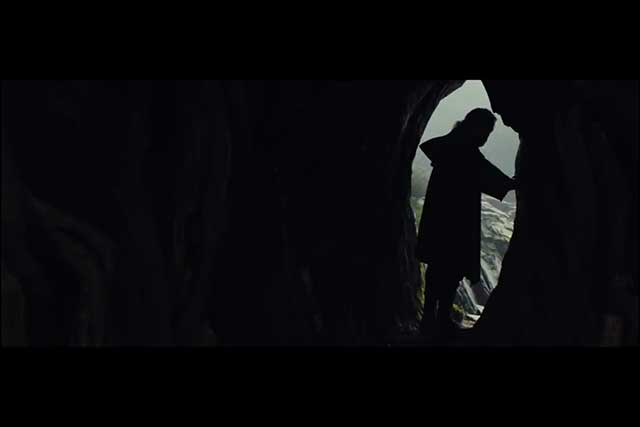 The Last Jedi – Luke Looks Back

The screen fades up on Luke looking out of a cave, finishing “…to end.” 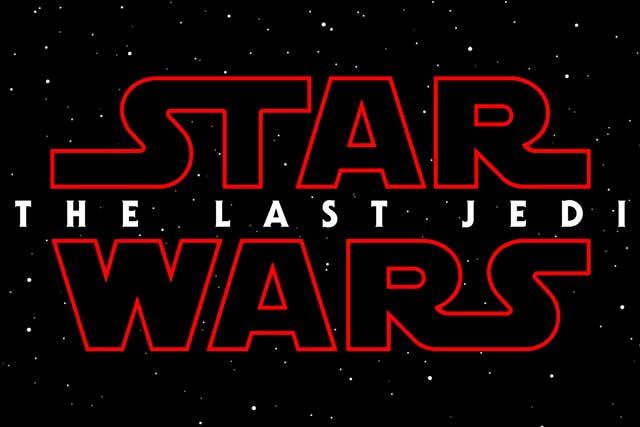 This is a great teaser trailer, it tells us a ton about the movie without really telling us anything.

First, we get the greatest hits, we see that all of our favourites are back (although interestingly no sign of Chewie, General Hux or C3P0).

We’re also shown a couple of scenes that I think are from The Force Awakens. Rey running with Luke’s lightsaber looks like it’s from the forest fight in TFA. The scene of Luke and R2 watching the burning building was briefly shown in TFA.

Maybe this will show us what happened to the Jedi Luke was training between Return of the Jedi and The Force Awakens, and we’ll learn something about the Knights of Ren.

I also think the final line in the teaser is from the beginning of the film, when Luke decides he doesn’t want to train more Jedi, but of course plucky Rey will win him over, and he will start to help her explore her powers.

This really is a great teaser trailer and does exactly what you would hope a teaser would do…create anticipation for the next little does of information that we’ll likely get in a couple of months (maybe attached to Spider-Man Homecoming?).