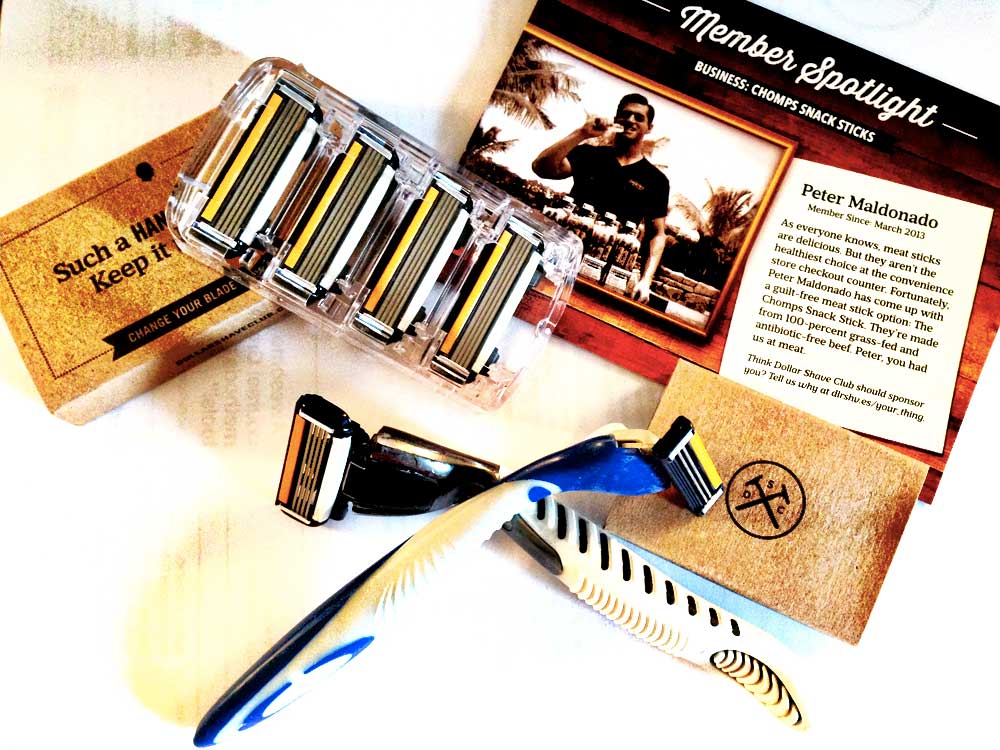 I hate shaving, but I like to be freshly shaved. It’s a dichotomy that has plagued me since my teen years. I am what the old folks call “hirsute”, meaning I’ve got a lot of hair, but it’s thick and shaving wrecks my skin, so I only shave every three or so days. My usual routine is Sunday night and Wednesday night (unless we’re doing something fancy which requires a touch-up). I shave my head too, but that’s usually once a week.

I have an electric razor, but it is slow, and hard to groom around ye olde goatee. My preferred battle weapon is a wet blade, usually a three bladed job (although a twin blade works well on my head). Of course like most men, I usually forget to buy blades, so I’m left hacking up my skin with something dumb.

I initially signed up for “The 4x”, for $6.50/month, which gets you a monthly shipment of a package of four – four bladed razors. Your initial shipment also comes with a nice metal handle which has some heft to it.

I quickly found that four blades a month is too many for me, I only go through about 2 a month. I switched to the “Humble Twin” for a couple of months at $3.50, which I used for just my head.

The blades fit perfectly on my “HeadBlade“, which takes Gillette Atra style blades.

The only problem with The Humble Twin is that the handle is really flimsy plastic that is intended to bend, but a couple of trips across my head, and I broke the thing.

I’ve stopped ordering the Twins, and now I just get The 4x every other month (they have a “not so hairy” option), so every two months, I get charged $6.50 to have blades delivered right to my mailbox. It’s a pretty good deal, and I never think about whether or not I want to get one more shave out of that blade, I just chuck it and use a fresh one after about two shaves.

Their packaging is pretty bare bones, but comes with one little feature I really like. Every month they spotlight one of their members’ businesses. It’s about post card sized, and it’s usually a fun little story.

Dollar Shave Club, I’ve been a member for two years now, and as their ad says “I’m practically a genius”. I highly recommend them.