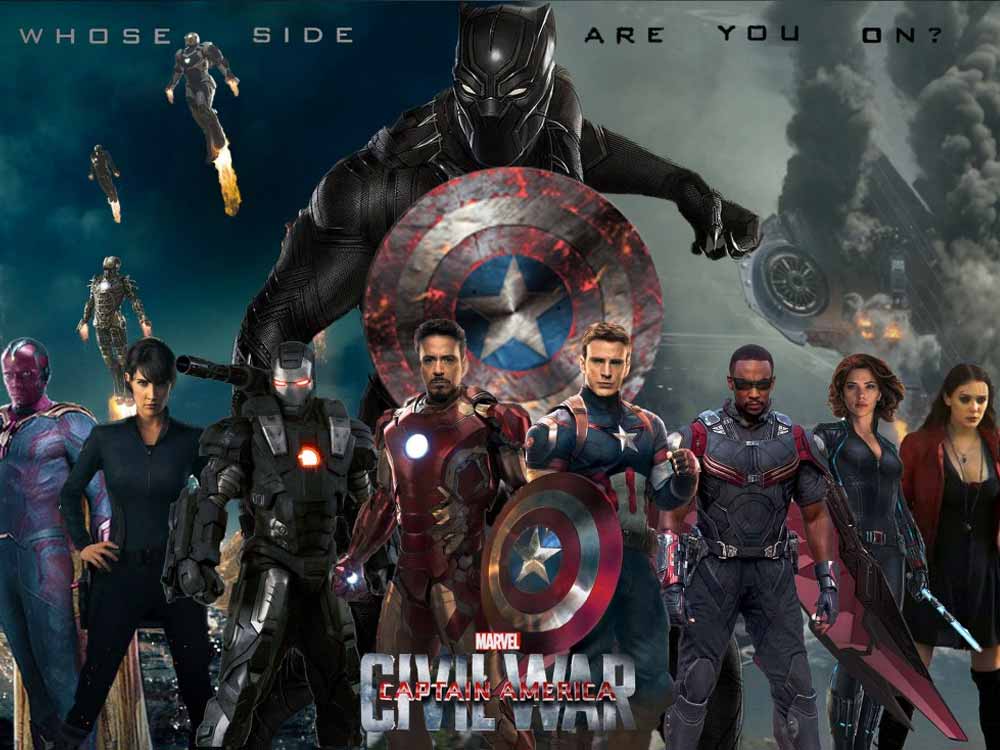 Captain America Civil War is the latest Marvel film, and on paper, like most of the Marvel movies, it shouldn’t work.

Let’s do the math.  The first Iron Man starred a washed up Robert Downey Junior and was directed by John Favreau who’s only other action flick was the 2005 box office bomb Zathura: A Space Adventure.  Iron Man had ZERO name recognition outside of hardcore comics nerds, and of the various heroes Marvel had at their disposal, was the least recognizable.

Captain America: The First Avenger shouldn’t have worked, a period piece where the superhero doesn’t even put on his suit until the last half hour, and even then, it’s not a recognizable “super suit”.  Plus, Chris Evans had failed as a superhero once already (the Human Torch in the Fantastic Four movies).

Thor was directed by a dude who made Shakespearean epics and had an absolute nobody in the lead role, and the villain was Loki, played by ANOTHER nobody!

Ugh, and The Avengers. Putting fan favourite Joss Whedon in charge of all of these guys, and then adding the Hulk, a character who had proven…twice…that he was un-filmable, there is no way that movie should have worked.

…and yet, RDJ has gone on to have one of the greatest second acts of a Hollywood career.  Faverau has become a major action director who just blew expectations out of the water with the Jungle Book.  Captain America was amazing, and his follow up film showed that Marvel could reach outside of the hero genre into spy and other stories.  Thor was surprisingly good, and made stars out of both Chris Hemsworth and Tom Hiddleson.  Whedon proved that you can make an ensemble work in an interesting way, and finally the Hulk is an interesting character!

With high expectations like that, Civil War had a lot to live up to. Also stacked against the movie were the facts that Age of Ultron seemed overburdened, and that Batman v Superman underwhelmed audiences and critics alike.

Captain America Civil War is so unlike either of those films though. It is fast paced even at 2 hours and 26 minutes long. It features the introduction of a half dozen brand new characters, breathes new life into old characters, and has character moments for relative newbies like Scarlet Witch and Vision.

Yes, Spider-Man steals every scene he is in, and his introduction, while not an origin, is a rebooting of sorts. We are introduced to a very young Spider-Man who is still donning a home-made costume that looks like a retrofitted hoodie.

The other surprising addition to the Marvel Cinematic Universe is Black Panther, who instantly commands attention.

This is a fun movie as well, with light hearted moments including world weary dialogue from Hawkeye and Black Widow, aw shucks astonishment from Scott Lang’s Ant Man, and great character moments between Captain America and the rest of the cast.

In the end you leave the movie unsure who’s side you should be on.  Tony Stark for realizing that he is to blame for much of the disasters that have happened in the MCU, or Captain America who thinks that reporting to anyone means that they become weapons who can be aimed at whomever the powers that be choose to aim them at.

This movie has something that neither Batman v Superman nor Age of Ultron had, and that’s  unique fights that don’t just look like video game cut scenes.  The choreography had me audibly laughing or gasping at how cool the use of the various powers were. Winter Soldier is a close quarters specialist, Cap is a physical powerhouse, often using the environment against his opponents. Ant Man is a true “Deus Ex Machina”, and Spider-Man’s webs have never been used more effectively.

While Captain America The Winter Solider is still my favourite Marvel movie to date, this is now a close number two.