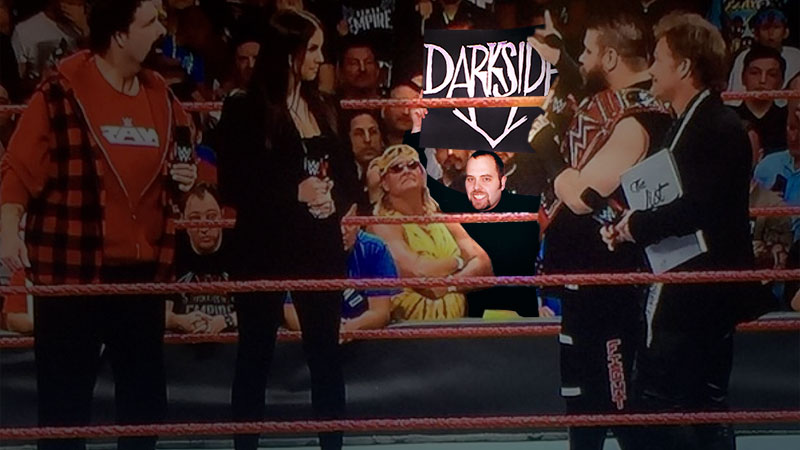 There was a time, where I was kind of a big deal.

I’ve loved wrestling my whole life, it’s been a close one/two between wrestling in comics. My buddy Ryan once walked into my bedroom in college where I had wrestling playing on TV, and I was drawing comics. He said “Dude, you are living your 12 year old self’s dream life!”.

In 1997, I set up a wrestling website on TSN.ca to provide coverage for TSN’s professional wrestling programming. I covered WWF and WCW, occasionally ECW and some independent promotions. As our audience continued to build, I started getting footage from WWF’s developmental group, and I got to follow the earliest appearances by guys like John Cena, Dave Bautista, Shelton Benjamin, and a young man named “Brock Lesnar”.

At one point, my columns were read by over a million people a month.

I was a guest on The LAW, Live Audio Wrestling many times, and I met a young lady named Trish Stratus on that show.

I got to interview a ton of guys, people like Bobby Heenan, Bret Hart, Owen Hart, Davey Boy Smith, Ken Shamrock, Triple H, Kurt Angle, Edge, Val Venis, Mark Henry, Jim Ross, Mick Foley, and legends like Ric Flair.  I had beers with Steve Austin and did a tour of the Jays locker room with Edge.

I also started creating websites for professional wrestlers, I created the early sites for Lance Storm, Perry Saturn, Davey Boy Smith, and Dean Malenko. One of my favourite photos is a picture of me, Chris Jericho, Dean Malenko, and Chris Benoit.

In one of the most surreal moments in my life, I got home to my roommate who said “Hey, you got a call from a guy named Davie, he had a British accent…was that Davey Boy Smith? The British Bulldog?”

It was…I was working on his website at the time.

After I left TSN in 2000 though, I rarely did much wrestling work, although I still regularly called in to the LAW and watched PPV’s with the guys from the show.

While I was at TSN, a few wrestling tragedies happened. Brian Pillman passed away before one show, while Owen Hart tragically died during the Over the Edge PPV.

After that though, there were so many deaths. It was like a who’s who of wrestling tragedies.

Many of them were guys I’d had beers with, who I had followed for years, and who I had gotten to know.

However, on June 24th, 2007, when Chris Benoit murdered his wife Nancy and their son Daniel and then took his life, it was too much. Wrestling was no longer fun to me.

I’d interviewed Benoit a few times, and had dinner with him, Jericho and Malenko one night in Toronto.  We weren’t friends, but our paths had crossed many times, and now he was a murderer.

I stopped watching wrestling cold turkey after that.

I love podcasts. I have for quite a long time, but finding well produced podcasts wasn’t always as easy as it is today. In 2014 I started listening to the Stone Cold Steve Austin podcast. Next up was the Ross Report featuring Jim Ross. They got me interested in the WWE again, but when I watched the shows, I had no idea who over half of the roster was.

In 2014 the WWE launched The WWE Network, and they started airing their weekly developmental program “NXT”, and I started watching it.  It was only an hour, but it was a great show. Well produced, with all of these fresh new faces that I’d never seen before.  Dudes like Neville, Bray Wyatt, Finn Balor, and some old favourites like Rhyno and Samoa Joe.

I started following more wrestling podcasts like Chris Jericho’s excellent show, and soon I was invested in watching the WWE PPV’s (something you get as part of the WWE Network).

Since then I’ve taken Maks to a few shows in London, and last year we got to go to one of the NXT takeover events in Toronto where we saw guys like Bobby Roode and Shinsuke Nakamura.

At this point, I am back loving wrestling.  Last weekend Maks and I watched the Royal Rumble, and then called the girls down for the women’s Rumble match where afterwards Ronda Rousey made her debut.

I realized watching the Rumble that I’ve now followed many of these guys and gals for the last four years and have seen them rise up the ranks from NXT to the main roster.

For me, wrestling is fun again.