Mark is not really the worst 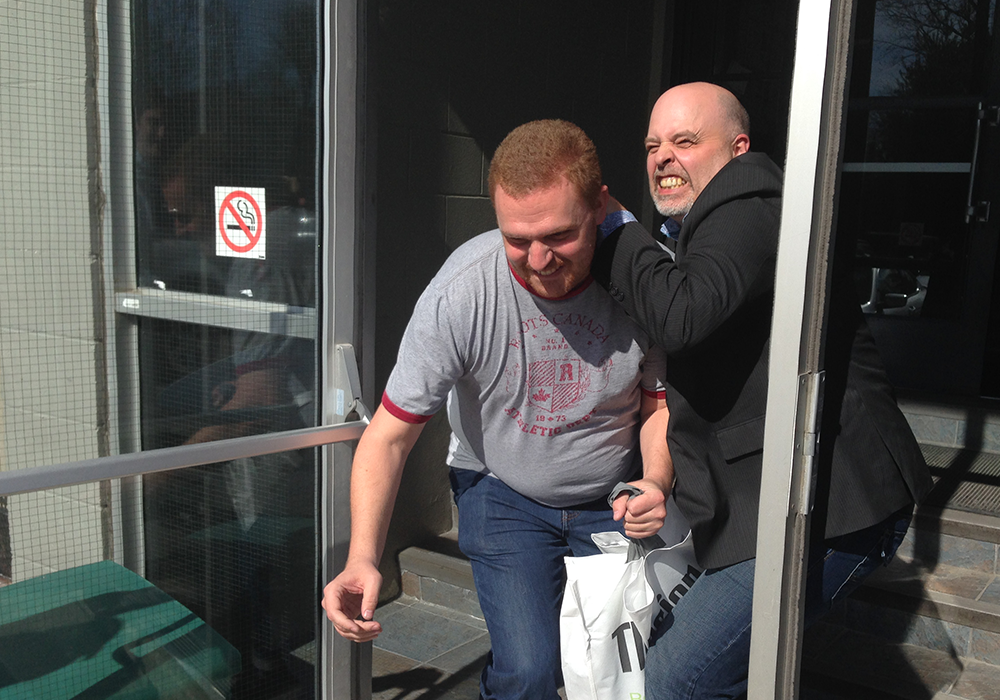 I’m getting pretty tired of saying goodbye to my friends at work.  Unfortunately it’s one of the realities of being a long time veteran at a place.  Before Info-Tech, my longest tenure at a place was five years.  I’m in my ninth year here right now though.

Yesterday I said goodbye to Mark Litnewski, a guy who I’ve known for my entire eight and a half years here at Info-Tech, one of my first friends in the building, one of the first people I managed here, and one of the people I relied on the most…even though I consistently and repeatedly called him “The Worst”.

First, a little bit about me.  When I like people, I pay them a lot of attention.  It’s not necessarily what you would call “good” attention, it’s usually friendly, but tinged with a bit of mean spiritedness to it.  From the outside looking in, if you saw how my best friend Ryan and I communicate, you would think I hate him more than any human being on earth.

For example, when he posted a nice looking picture of himself on Facebook recently, I replied with this:

All right, I have to say it. This picture, I don’t know what it is about it exactly, but it makes me want to punch you right in the squish. I think it’s the smug look you’re giving me where you’re quite obviously saying “Ooooh, look at me, I’m so handsome and have all of my original hair. Ooooh, I’m so very special, all this and I smell FANTASTIC too!” – what an arrogant jerk.

If I’m constantly making mean comments to you, I probably am quite fond of you.  I was mean to Mark all.the.time.

I first met Mark my first day of working at Info-Tech. I came on as a front end developer, and I was paired up with someone who wasn’t a good fit for me.  He was too technical, and went way deep in the weeds.  My first day ended with me having a bit of a panic attack as I thought I may have been in way over my head.  The system was ridiculously complex, and I couldn’t make heads nor tails of how things worked.  I called my wife in a panic and she calmed me down.

Day two, I sidled up to Mark and asked him to show me around.  He knew how things worked, understood why I would be confused, and told me not to get confused by “the other guy”.  By the end of day two, I understood things, and I told Mark, “I’m sorry to tell you this, but you’re my new best friend.”.

From that day on Mark was the guy I would go to when I had a question, when I needed help, or when I just needed to bounce stuff of of.  Nobody else in the office was into front end design, this was years before we would have “DevSigners”, there was very little thought into what made a good experience, it was all about delivering what the business wanted, not what the users needed.

We worked on a huge project about a year after I started, called “OptimizeIT”, in about two months we went from concept to delivery including six weeks of rapid development, fully prototyped HTML mockups, and actual user testing.  I was really proud of what we built, and Mark was instrumental as someone who pushed my design stuff down, and I feel like he was learning as much from me about user experience as I was from him about code.  Some of my favourite memories at Info-Tech are of being in my office, cranking out Puscifer’s first album as I worked on OptimizeIT.  We worked crazy hours, and worked our asses off.

When we delivered on the project and blew away everyone’s expectations, we were rewarded with a trip to Las Vegas.  Mark was the youngest of the group that went to Vegas, and we all had a great time.

It wasn’t long until we decided that we needed to move on from the platform that we were using.  The web site was getting old, the infrastructure couldn’t support our needs, and it was time to make a major change.  We created a small team of “The Specialist, The Front End Designer, The Old Vet, and The New Kid”.  Mark played the role of the new kid. I knew he could learn anything quickly, that he’d work his ass off, and that he would provide energy and optimism.

It was long, hard work, but the team investigated a bunch of different options, and ended up choosing Ruby on Rails.  That was six years ago (I can remember to the day, because the day we started is the day my son Maks was born).  I planned out the project, and then promptly disappeared for two weeks as I got used to life with a new human in the house.

We anticipated it would take six to eight weeks to build the new site.  Ten months later, we were finally done.  The new site blew away expectations, but the five of us who spearheaded the site were burned out.

I can confidently say that Info-Tech would not be in the position it is today if it wasn’t for the hard work of Mark and the team.  Mark was rewarded with a trip to President’s Club in Costa Rica for all of his hard work.

Marks and my paths diverged for a couple of years after the site launched.  I ended up doing a tour of duty with the Production Team shortly after the launch, Mark ended up working on launching our new CRM system, and then did a ton of other stuff.

About eighteen months ago, there was a big shakeup, and I had to build a new team.  I asked about the possibility of working with Mark again.  I knew he hadn’t written any Rails code in a while, but I also knew that he was good at picking things up quickly.

Most importantly, I knew that I could trust Mark to just get things done, and that he would help motivate the team.

Every day we would see each other and I would say mean things to him.  “You’re the worst Mark.”  “I hate you so much I sometimes think I might cry.”  “I wish I could hate you to death.”, and Mark would laugh at my ridiculousness.  The meaner I was, the more he would laugh.  The highlight of my day would be the staring contest with him, where I would try to make him break into a laugh, or just come over and beat him with “MotivateIT” (our motivational plastic bat).

Mark’s love life has been a train wreck to put it kindly, but in the last year he re-connected with someone we both knew years ago, and they’re a great match.  I’m so happy for him outside of work…though I would never let him know that to his face.

He got an amazing offer elsewhere, and when he talked to me about the offer, I had to be honest, as much as it would suck to lose him, it was the right thing for him to do.

So Mark, I want you to officially know that yesterday sucked.  I laughed as I tossed you out the door because a little piece of Info-Tech died when you left.  It hit me surprisingly hard as I realized that one of my best friends at Info-Tech won’t be there today.

Every time I said you were the worst?  I was really saying you are the best.

See ya around buddy.