My Favourite Comics of 2014 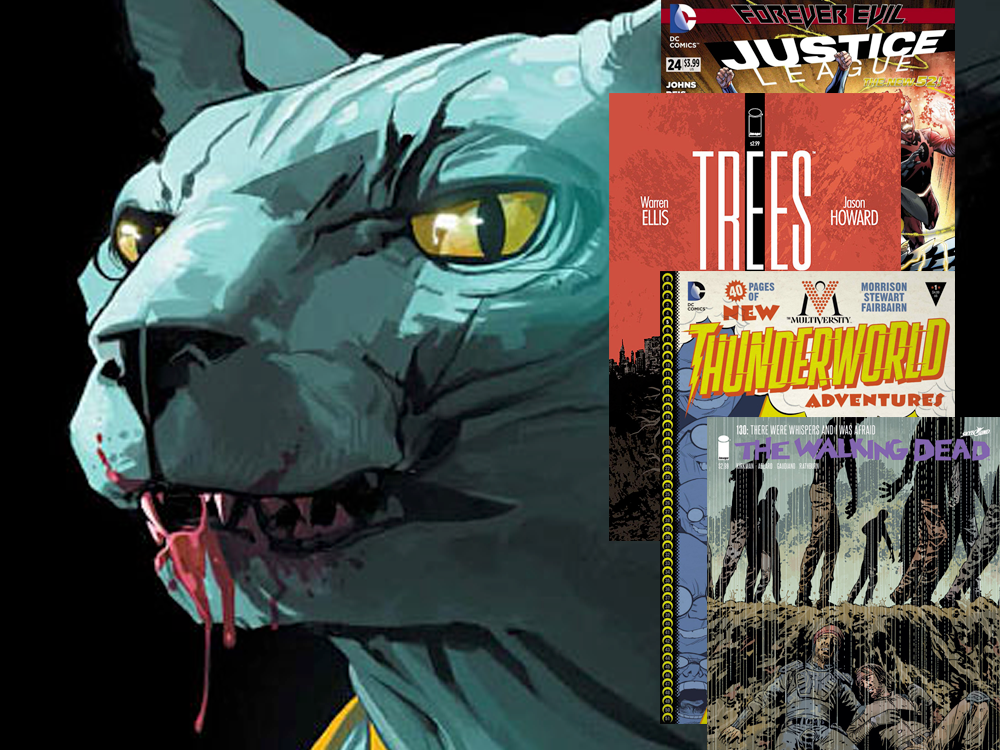 I like putting together a few year in review lists that remind me what I enjoyed in a year.  Comics are a big passion of mine, big enough that I take the kids to two or three conventions every year, and always make plans to go to one of the bigger ones (like C2E2, WizardWorld Chicago, or the big daddy of them all, San Diego Comicon).

I sat down this year to put together a little list of my favourite comics of 2014. This is by no means a comprehensive list, there was plenty of one-off stuff that I enjoyed through the year, but this is the stuff that stood out to me month-in and month-out.

Multiversity
There are two things I absolutely love.
1: Superhero comics. I believe super heroes are our modern mythology. They are morality tales wrapped up in four colours and spandex. I love a good morality tale.
2: Alternate Universes. I love the concept of the world slightly shifted. My favourite classic Star Trek episode is “Mirror Mirror”, I love that the new Star Trek movies are basically an alternate universe of the original stuff we knew. Growing up my favourite comics were Crisis on Infinite Earths, and Excalibur, both about alternate universes.

Multiversity is both of these things wrapped in a bunch of Grant Morrison Goodness. It’s been full of big grand ideas, and I’ve written about my love of it in the past. It’s been the comic I am most excited about every month, and so far I’ve purchased every issue in both digital and physical copies, and spent an equal amount of time reading through both.

Saga
This comic shouldn’t be as good as it is. It’s basically Romeo and Juliet in Space. If that’s all Saga was though, it wouldn’t be very good at all. At it’s heart, Saga is the story of a family.

The reasons it is so good are many. The characters are visually interesting, have complex motivations, and act like…people. Sometimes they’re good, sometimes they are horrible. Every issue ends with some sort of cliffhanger, and the team has done an amazing job of scheduling hiatuses at really smart points (basically at the end of every arc, they wait until the collected edition is released before launching the next arc, meaning they keep getting new readers).

The Walking Dead
It’s been just over two years since issue #100 came out. It was the first comic ever to make me so angry that I threw the issue down and walked away from it in the middle of the issue. How is it that over 35 issues later it still has my fascination?

The series has shifted recently from “villain of the season”, to a bit more stability, but Kirkman seems to revel in creating stability just in order to introduce horrible chaos, and it feels like that is about tho happen.

MillarWorld: Jupiters Legacy, MPH, Trees
Mark Millar has long been one of my favourite writers along with Warren Ellis and Grant Morrison. All three have their very vocal detractors, but I really like the big ideas and ability to take a common trope and flip it on its head.

Jupiter’s Legacy is the story of a family of superheroes and all of the problems that go along with that. It’s complicated, but at the same time it’s a simple idea that features gorgeous art by long time Millar collaborator Frank Quitely. MPH is basically “What if Flash was a bad guy”, but the heroes arc here takes an interesting turn when the three main characters begin realizing the morality of their situation. Finally Trees is the hardest of all to describe. Imagine if aliens landed tomorrow but paid absolutely no attention to us, and were these huge, monstrous pillars that just sat there and did pretty much nothing (other than expel toxic waste every decade or so, and slowly terraform the immediate surface near them).

Forever Evil: Forever Evil, Justice League
Keeping in mind that my favourite two things are superhero comics and alternate universes, this one shouldn’t come as a huge surprise. What did surprise me was how much I enjoyed the Justice League tie-ins. It was basically a “Secret Origins of the Crime Syndicate” mini-series. The main series was interesting, but continued the troubling trend of keeping the DC Universe “Grim and Gritty”. I’m not saying comics have to be “shiny and happy” for me to enjoy them, but I would really appreciate it if there was more hope in DC’s universe.